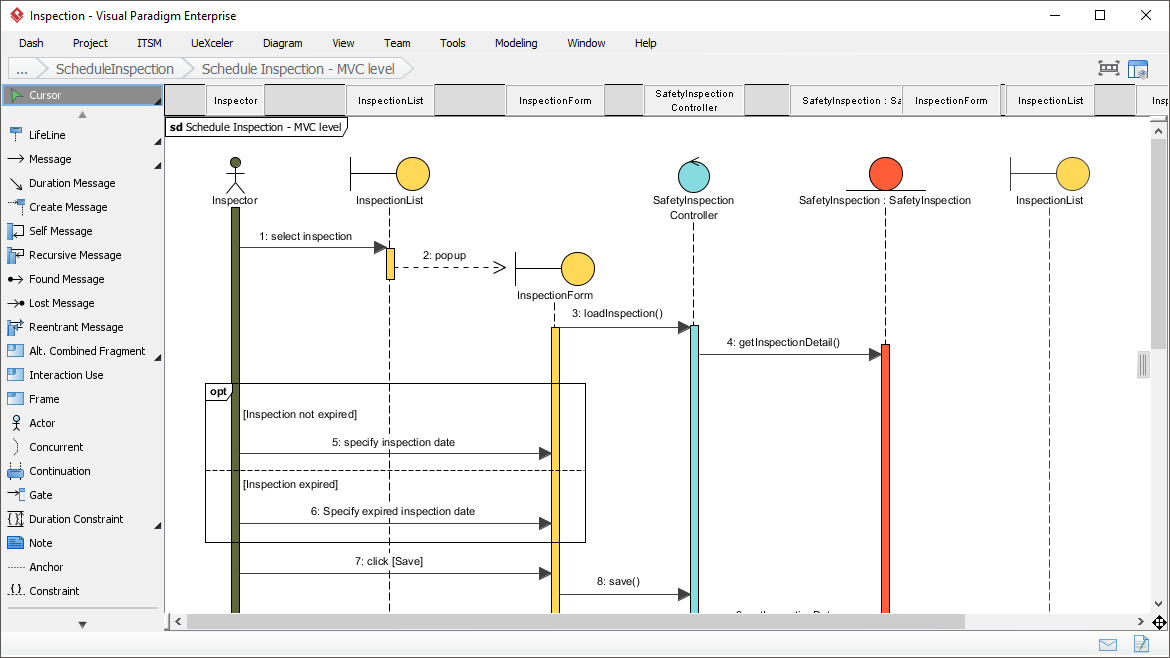 Table of Contents hide
1 The Components of Sequence Diagram
1.1 Object
1.2 Lifeline
1.3 Message
1.4 Creation and Destruction Messages
1.5 Non instantaneous message
1.6 Focus of Control
1.7 Iteration notation
2 Example: Place Order
2.1 Sequence Fragments
3 Sequence Diagram Notation Summary
4 Example  Place Order Scenario
5 Quick Video – 5 Steps to Draw a Sequence Diagram
6 Summary
7 References
Both sequence diagrams and collaboration diagrams are kinds of interaction diagrams. Interaction diagrams address the dynamic view of a system. A sequence diagram is an interaction diagram that emphasizes the time-ordering of messages. It depicts the objects and classes involved in the scenario and the sequence of messages exchanged between the objects needed to carry out the functionality of the scenario. Typically, you’ll use one sequence diagram to specify a use case’s main flow, and variations of that diagram to specify a use case’s exceptional flows. 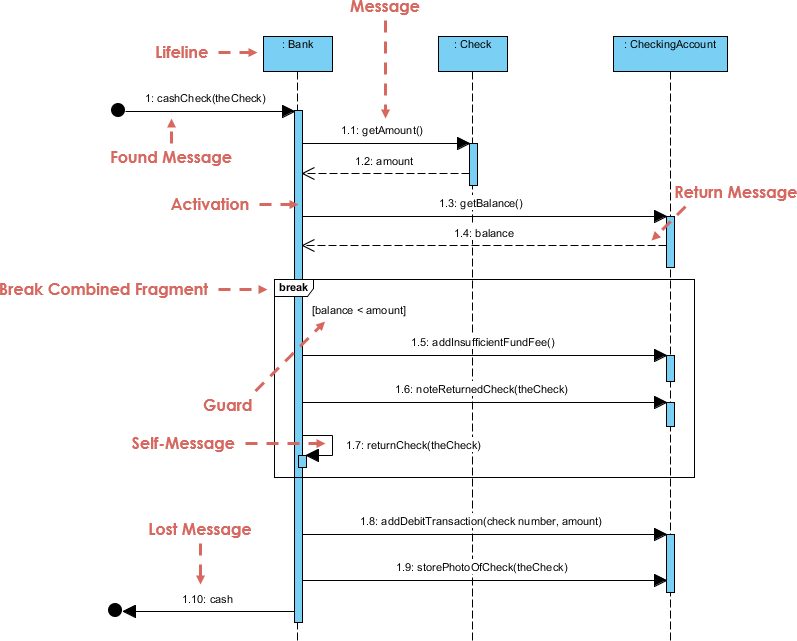 The Components of Sequence Diagram

In the UML, an object in a sequence diagram is drawn as a rectangle containing the name of the object, underlined. An object can be named in one of three ways: the object name, the object name and its class, or just the class name (anonymous object). The three ways of naming an object are shown in Figure below.

Entities of participants in a collaboration (scenario) are written horizontally across the top of the diagram. A lifeline is represented by dashed vertical line drawn below each object. These indicate the existence of the object. 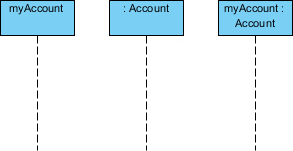 Object names can be specific (e.g., myAccount) or they can be general (e.g., myAccount :Account). Often, an anonymous object (:Account) may be used to represent any object in the class. Each object also has its timeline represented by a dashed line below the object. Messages between objects are represented by arrows that point from sender object to the receiver object.

Everything in an object-oriented system is accomplished by objects. Objects take on the responsibility for things like managing data, moving data around in the system, responding to inquiries, and protecting the system. Objects work together by communicating or interacting with one another.

The line type and arrowhead type indicates the type of message being used:

Participants do not necessarily live for the entire duration of a sequence diagram’s interaction. Participants can be created and destroyed according to the messages that are being passed. 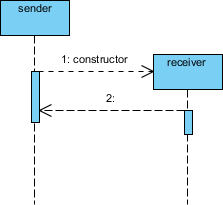 destructor message destroys its receiver. There are other ways to indicate that a target is destroyed during an interaction. Only when a target’s destruction is set to ‘after destructor’ do you have to use a destructor. 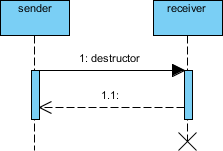 Messages are often considered to be instantaneous, thus, the time it takes to arrive at the receiver is negligible. The messages are drawn as a horizontal arrow. To indicate that it takes a certain while before the receiver actually receives a message, a slanted arrow is used. 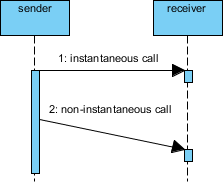 Focus of Control represents the period during which an element is performing an operation. The top and the bottom of the of the rectangle are aligned with the initiation and the completion time respectively

Iteration notation represents a message is sent many times to multiple receiver objects, as would happen when you are iterating over a collection. You can show the basis of the iteration within brackets, such as *[for all order lines].

The example shows a Sequence diagram with three participating objects: Customer, Order, and the Stock. Without even knowing the notation formally, you can probably get a pretty good idea of what is going on. 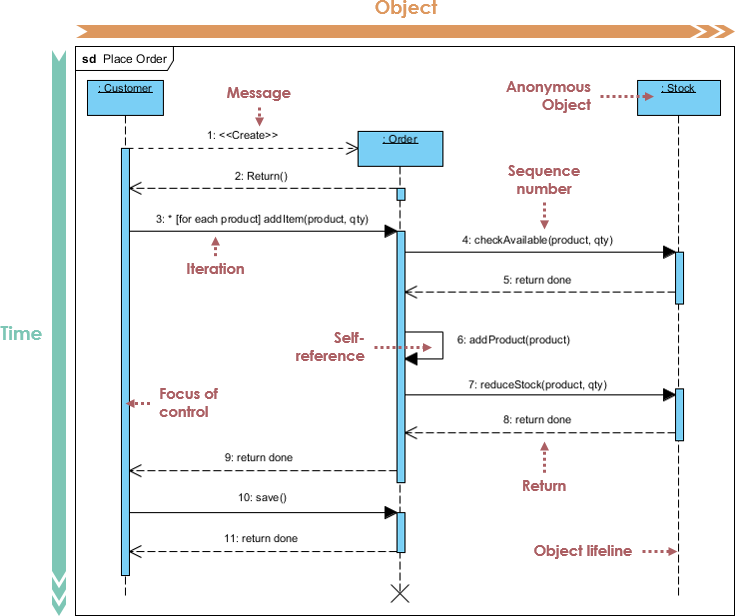 A sequence fragment is represented as a box called a combined fragment, which encloses a portion of the interactions within a sequence diagram. The fragment operator (in the top left cornet) indicates the type of fragment. Fragment types include ref, assert, loop, break, alt, opt and neg, ref, sd.

A member of a ship who would like to place an order online. The item ordered will be sent to the member either send by courier or by ordinary mail depending on she member status (VIP, Ordinary membership). Optionally, the shop will send the member a confirmation notification if the member opted for the notification option in the order. 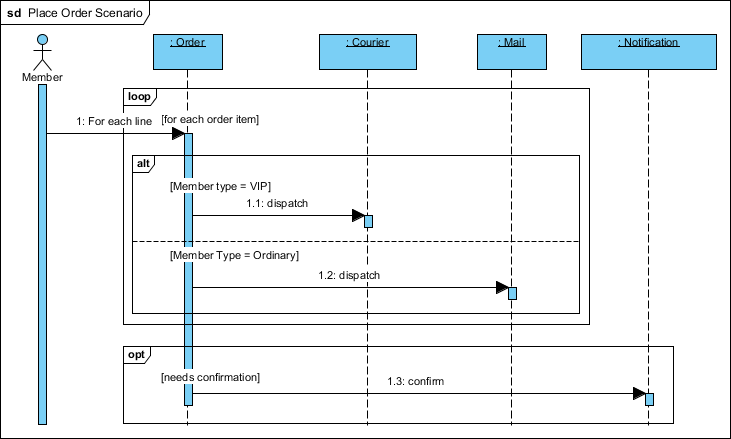 Visual Paradigm supports sequence diagram and other UML diagram types. You can find all the tools you need in modeling the dynamic behaviors of a system using sequence diagram.

Sequence diagram is a time-sequence based model of object collaboration. It shows how objects interact with others in a specific use case scenario. With advanced visual modeling capabilities, you can create complex sequence diagrams in a few clicks. In addition, Visual Paradigm can generate sequence diagrams based on the flow of events you define in the use case description. 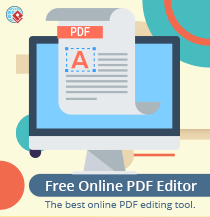