Skip to content
Table of Contents hide
1 Why UML?
2 What is a model?
3 What UML is NOT?
4 Objective of UML
5 What Does a Modeling Language Provide?
6 Brief History
6.1 Release Dates
7 The motivation of the Method Unification by the “three Amegos”
7.1 UML Partners
8 UML Notation Input for different Methods before the Unification
9 The Role of Notation
10 Benefits of UML
11 UML 4 + 1 Views
12 UML 2 Diagrams
13 Structural Diagrams
14 Behavior Diagrams
14.1 UML Profile
14.2 Related Diagrams for Software Development
15 Conclusion
16 Automate UML Tool

Unified Modeling Language  is an open standard graphical notation for system development proposed Object Management Group. The notation is based on work from Booch, Rumbaugh, Jacobson . UML is a modeling language to express and design documents, software particularly useful for oriented oriented design. The language can be used from general initial design to very specific detailed design across the entire software development lifecycle. The definition of UML is defined as following:

As software architectures grow in size and complexity so does the need for software models. UML is the software industry’s dominant modeling language. It is currently a defacto standard adopted by the Object Management Group, the world’s largest software consortium. It is difficult to find a software project with with more than 10 developers who do not use UML in some way to specify their architecture.

Here is some more other facts for using of UML in our software development process:

What is a model?

when we use UML to create models of a system under developed before we code the software,  they represent the problem in a simplified way. They provide a structure for problem solving. They help in understanding how one can proceed with the problem at hand. They also allow to experiment with multiple solutions. Since the models are created before the actual development of the system, we can understand different possibilities, problems, options etc. This also leads to decrease in the development costs. Since the time will not be wasted in trials and errors the product will be ready in lesser time. Models also help manage the complexity of the problem so the planning of the development, allocation of the resources like machines, programmers, testers can be done easily.

What UML is NOT?

What Does a Modeling Language Provide?

Back in the late 80s, when we started modeling, there were many different methodologies. And each methodology had its own notations. The problem was that if different people were using different notations, somewhere along the line somebody had to do a translation. A lot of times, one symbol meant one thing in one notation, and something totally different in another notation. In 1991, everybody started coming out with books. Grady Booch came out with his first edition. Ivar Jacobson came out with his, and Jim Rumbaugh came out with his OMT methodology. Each book had its strengths as well as its weaknesses. OMT was really strong in analysis, but weaker in design. The Booch methodology was stronger in design and weaker in analysis. And Ivar Jacobson’s Objectory was really good with user experience, which neither Booch nor OMT really took into consideration back then. Booch, Jacobson merged the two methods in 1994  and then  Rumbaugh joined in 1995.  UML 1.1 was published in 1997 from OMG includes the input from others, e.g. Yourden. The UML v2.x is the most current version. 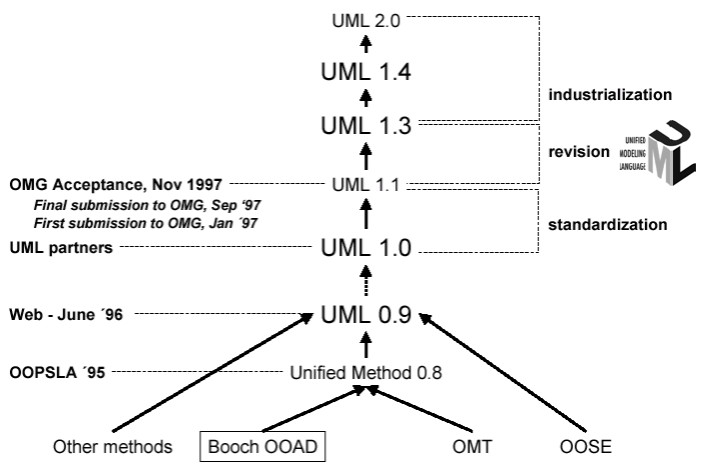 The motivation of the Method Unification by the “three Amegos”

UML Notation Input for different Methods before the Unification

UML represents the unification of the Booch, OMT, and Objectory notations, as well as the best ideas from a number of other methodologists as shown in Figure below. By unifying the notations used by these object-oriented methods, the Unified Modeling Language provides the basis for a de facto standard in the domain of object-oriented analysis and design founded on a wide base of user experience.” 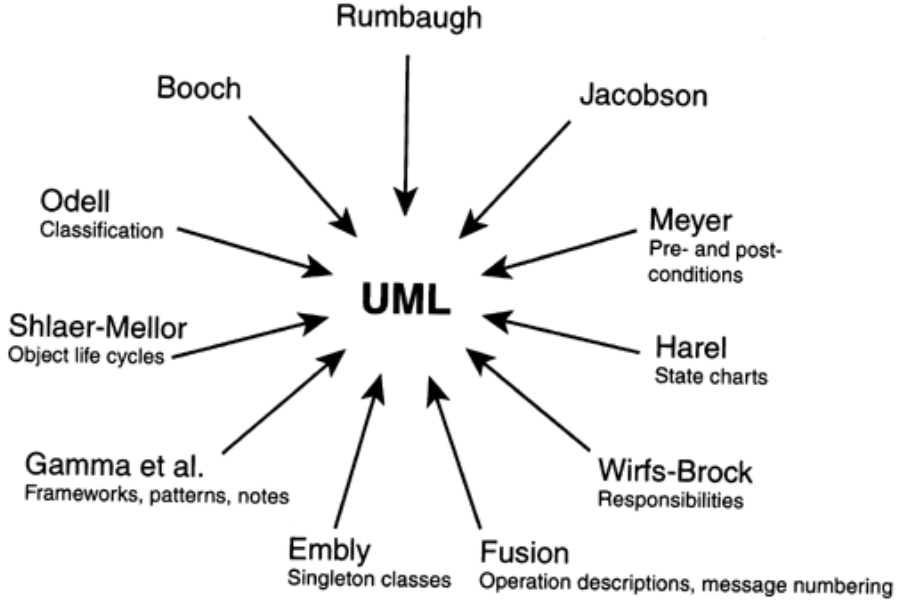 The Role of Notation

Notation plays an important part in any model ”it is the glue that holds the process together. “Notation has three roles:

The Unified Modeling Language (UML) provides a very robust notation, which grows from analysis into design. Certain elements of the notation (for example, classes, associations, aggregations, inheritance) are introduced during analysis. Other elements of the notation (for example, containment implementation indicators and properties) are introduced during design.

UML can be applied to diverse application domains (e.g., banking, finance, internet, aerospace, healthcare, etc.) It can be used with all major object and component software development methods and for various implementation platforms.

If we want to map the above five views to the iterative life cycle phases of fig. 3, we could say the following:

UML have several different types of diagrams that can be used to describe a model from different point of views. There are two broad caetgories of diagrams and then are again divided into sub-categories:

Interaction Type Diagrams – interactions of the organizational parts of the model.

UML Profile is not exactly a diagram, but a profile to describe extensions and subsets to UML. Subsets are described using the Object Constraint Language (OCL). Extensions are created by defining stereotypes, which are tags that can decorate any model element. For example, we may tag a class “persistent” and use the tag to identify a class whose instances are stored past the lifetime of the run-time of the system. Informally—and this is ideologically unsound—a profile is any set of extensions and subset to UML whether written down using these mechanisms or not. Formally, a profile is the OCL and stereotype definitions that describe the rules, which in UML 2, are captured in a package.

We have taken a look at the origins and definition of the UML to provide a simplistic understanding of what it is, and what the UML can offer us. We have also examined how we can benefit from its use on our next development project and briefly explored the architectural views and models and type of diagrams available in UML 2. UML is a not a process, but a open standard visual modeling notation for developing software intensive system. The components needed for a successful project require three facets: a notation, a process and a tool:

Notation Only – You can learn a notation (e.g UML), but if you don’t know how to use it (process), you will probably fail.

Process Only – You may have a great process, but if you can’t communicate the process (notation), you will probably fail. And lastly

No Tool Support – if you cannot effectively document the artifacts of your work (tool), you will probably end up waste a lot of time and eventually fail.

Visual Paradigm is a automated tool that ensures you will be successful in your software projects with: 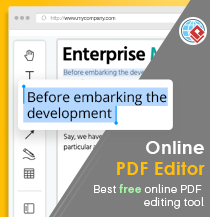